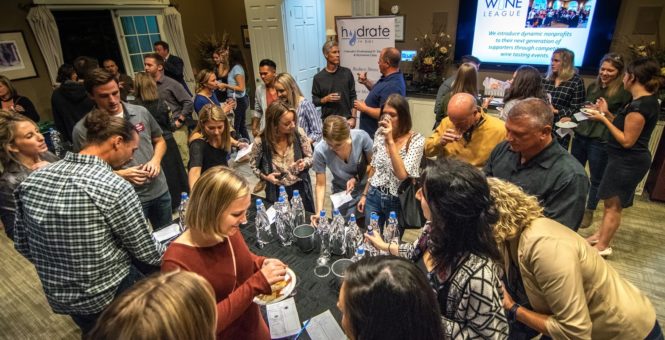 What’s better than sipping wine with friends in downtown Denver while giving back to local non-profits? That’s the question WineLeague answered in creating their competitive wine tasting events for busy young professionals. With a mission to connect on-the-go millennials with non-profits, WineLeague, a non-profit itself, has created a dynamic space for networking and relationship building over a glass of wine.

Earlier this month, KidsTek partnered with WineLeague for the first time to test our wine knowledge and mingle with Denver’s young professionals.  With 29 teams entered and 29 bottles of Syrah to taste, the night was kicked off by Aimee Charlton, KidsTek Executive Director, sharing KidsTek’s mission that today’s literacy is tech literacy. While each team sipped their way through the wines, participants were also able to bid in the silent auction for a variety of prizes including passes to Orangetheory Fitness and a gourmet cheese tray from So Damn Gouda.

At the end of the night every participant voted for the most and least favorite wines to determine the top three teams and the bottom one, who would take their own “bottle of kerosene” back home. The top winner of the night was team Group Therapy with their bottle of 2014 Bogle Vineyards Sirah while team Bunz received 18 “worst” votes and brought home a golden toilet along with their 2014 Cupcake Vineyards Sirah.

KidsTek staff’s unrefined palette didn’t win any prizes, but our Board Chair Rich Liner did win the So Damn Gouda silent auction. Rich announced his prize would be used for auction at the 2019 KidsTek Gala in February, so keep an eye out for more information about how to support KidsTek at our upcoming events.