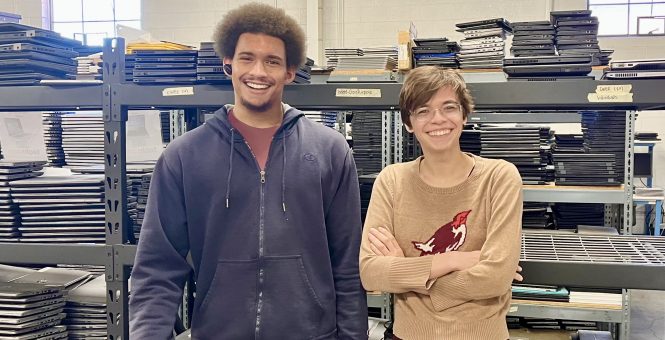 Like all educators, we love to brag about our students’ accomplishments, so when the opportunity arose to interview a former KidsTek student and current PCs for People employee, we jumped at the chance to catch up with Zane McCune.

Zane, a recent graduate of Hinkley High School in Aurora, took KidsTek’s Intro to Computer Science class in 2019, earning the IC3 Digital Literacy certification, and went on to receive his A+ certification after taking KidsTek’s prep course this spring. Now, Zane works at PCs for People in Denver as a Technician. In that role, he builds and tests laptops and desktops to get them ready for customers. “Thanks to the helpful IC3 certification provided by KidsTek, I am also pretty good at translating computer language into ‘normal person language’, so I often help our customers figure out issues with our computers that our customer service team may get stuck with,” says Zane.

In his new position, Zane says he enjoys the relaxed and self-paced environment, but also that he finds meaning in working to further PCs for People’s mission. “Not a lot of people know that computers usually don’t get worse with time, and therefore you can keep a computer in service for a long time. People often discard their computers for a newer model simply because it’s newer, this produces massive amounts of waste,” says Zane. “I appreciate PCs for People’s mission because it cuts down on this waste and allows people who would ordinarily not have access to computers to get very decent hardware and the opportunities that come with it.“

In the future, Zane plans to take a class to earn a cybersecurity certification and continue to expand his repertoire of computer skills with an eye on a career in that field.“Ever since I was a kid I’ve wanted to learn more about computers. It’s really as simple as that,” says Zane. “The more time I spend with computers, the more I get to learn.”

KidsTek High School Instructor Katy Limes, who was Zane’s teacher both at Hinkley and for the A+ course, says “Zane is a super smart student and is very passionate about computers. I look forward to seeing what he does with it in the future and how his career grows!”