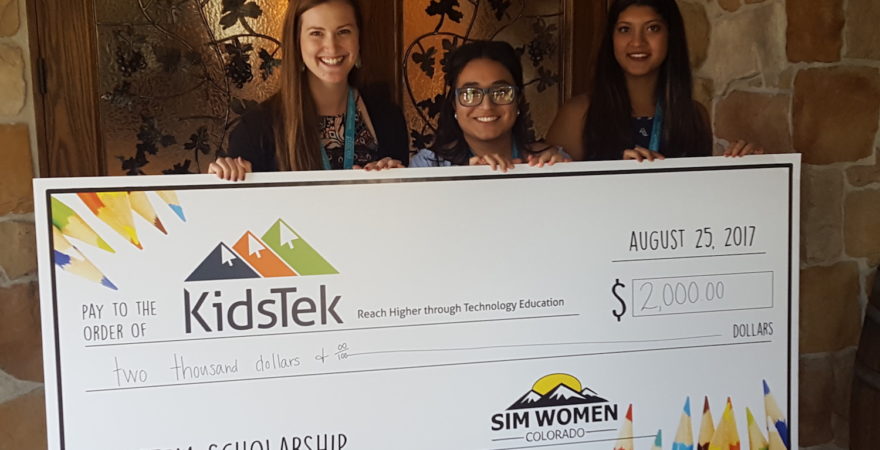 The 3rd Annual SIM Women Colorado’s Conference took place at the end of August. KidsTek employees Aimee Charlton and Meghan Lang attended, along with two KidsTek student alums, Fatima Prieto and Hoshi Corona. The conference featured many speakers who addressed topics from managing life through chaos to making career transitions. Networking was sprinkled in during breaks throughout the day, and raffle prizes were given to lucky women whose tickets were drawn.

One special surprise that day was a donation made to KidsTek at the end of the conference. SIM Women, and conference participants, donated money to apply directly toward the KidsTek Scholarship Fund. This generous donation will directly benefit a KidsTek student who is awarded the KidsTek Nancy Sauer Memorial scholarship.

Another conference highlight was that Jen Harding, Founder and Chairwoman of SIM Women Colorado, and KidsTek board member, was presented with the Micki Nelson Lifetime Achievement award. Micki presented the award herself, gave a heartfelt congratulations, and read words of praise from many of Jen’s co-workers. The award was well-deserved, and Jen was more than surprised to receive such a special recognition.

Overall, the event was a huge success and the money donated by SIM Women Colorado will have a strong impact on the future of a deserving KidsTek student.