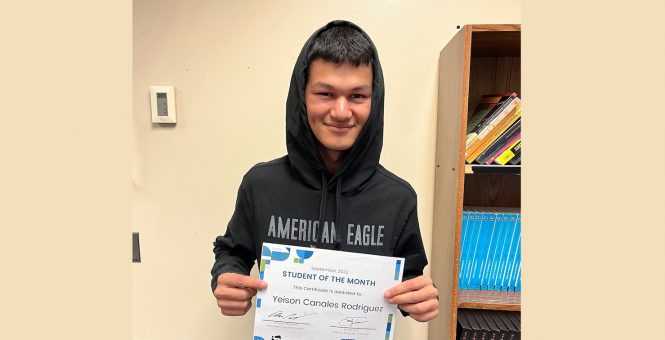 KidsTek’s Student of the Month for September is Yeison Canales Rodriguez from Hinkley High School. Yeison is a junior at Hinkley and is taking Katy Limes’ Intro to Computing class.

“Yeison was the first student whose name I learned this year – he’s really outgoing and always willing to reach out and lend his peers a hand or raise a hand and participate in class,” said Limes. “I look forward to getting to know him better the rest of this year!”

Yeison says that the most interesting part of the class so far has been learning about parts of the computer and what they do, but the coolest thing was learning about viruses.

After high school, Yeison plans to join the military. He’s not sure which branch, but is leaning towards the Air Force. Yeison hopes to eventually become an officer and forge a path to college through military service. He’s especially interested in getting involved with techie parts of the service, like drones and software.

In his free time, Yeison likes to play video games like Call of Duty and mobile games. He also spends a lot of time taking care of his younger siblings.