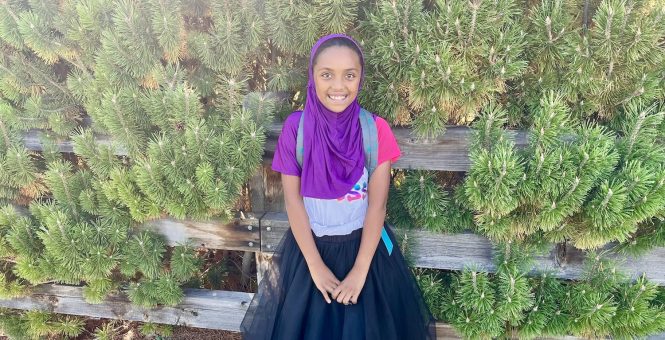 KidsTek’s Student of the Month for October is Seada Nuru from Sable Elementary School. Seada is a fourth-grade student who participates in KidsTek’s after school enrichment through Aurora’s COMPASS program.

“Seada is a true leader in her group and is always the first to volunteer to be a helper,” says Program Manager Emily Tow. “Seada has such a positive attitude and is always kind and supportive of her peers, plus she’s super-smart!”

In KidsTek’s elementary programs, students learn and practice basic computer skills and increase their tech confidence through creative projects. For example, students at Sable are currently working on creating their own zoos by collecting images of animals and facts about those animals in Google Slides presentations. “Since our elementary programs are after school enrichment programs, we get to have a bit more fun with the kiddos since it’s not actually ‘school’,” says Tow. “It’s a perfect environment for us to accomplish our goals of making tech approachable and fun for kids who might not have a ton of experience and exposure to using computers yet.”

Seada says that her favorite part of KidsTek is working on the computer and learning new things. She says she especially enjoys making presentations and liked learning about everyone else in the group during “About Me” presentations at the beginning of the session.

Outside of school, Seada likes to watch videos on YouTube and her favorites are about ninjas. She also enjoys singing along to songs on Spotify like “Sunday Best” by Surfaces.