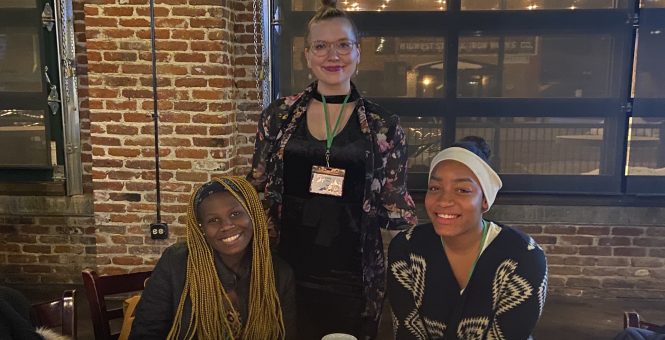 Earlier this month, over two hundred generous people gathered for our annual KidsTek Tech Leaders Gala. This year was extra special, as KidsTek celebrated our 20th anniversary! The gala took place at Mile High Station by the Broncos stadium in Denver. To begin the evening, there was a live band playing to entertain during the cocktail hour. There were a number of food stations for our guests, and KidsTek high school students were on hand at demonstration tables where they shared what they have been learning in our programs this school year. There were also a number of silent auction items available for donors to bid on throughout the evening.

During the second half of the night, KidsTek students were the stars of the show. Eight KidsTek students spoke about their experiences with KidsTek classes during the program portion of the evening. We had elementary-aged speakers, middle school speakers, high school speakers, and our event was emceed by two KidsTek alums who are currently in college. Program Manager, Meghan Lang said, “When our students lead the most important part of the evening, it really draws people in and lets them gain a good understanding of what KidsTek is all about. Our students are such incredible, inspiring people, and it is a highlight of my year when they get to shine on stage.”

The entire evening was such a success. Andrew Robles, junior at North High School and one of our speakers said, “It was a very fulfilling experience for me to speak at the gala since I wanted to overcome my fear of speaking in front of people. The whole event was really fun!” KidsTek is so proud of each of the students that shared their stories and helped KidsTek raise money for our programs.