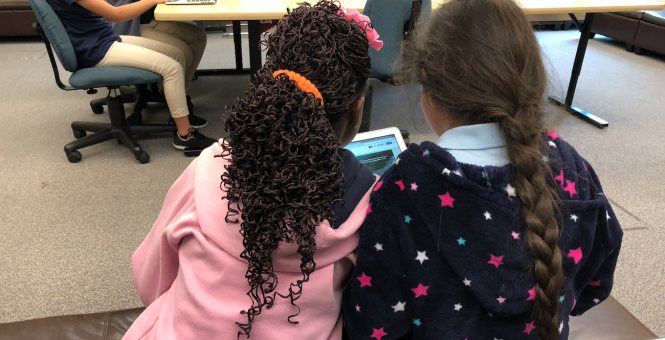 Leading an after school KidsTek class a couple times a week, for one hour each, can sometimes make it tough to see just how much the students are growing each session. That is one reason why KidsTek is so thankful for our school partners who see the same students daily and share some amazing stories of how after school enrichment programs truly enhance their students’ school day learning.

Erin Autobee, a technology teacher at Fulton Elementary School, recently shared an instance of how KidsTek has crossed over into her classroom. Erin started a new unit teaching her 5th grade class new skills using Google Slides. While the students were working on creating their own slide shows, Erin noticed current KidsTek students helping their classmates with skills they had learned during KidsTek after school. Camiya, a 5th grader at Fulton Elementary School, is one of those KidsTek students who stepped in during Erin’s class to assist a classmate with adding an image to the background of their slide. Not only was Camiya being helpful, she was also using a skill Erin had not taught in her class and had not required in this specific assignment.

KidsTek Instructor Courtney Hermes was pleasantly surprised by this story as she had only briefly covered adding background images in PowerPoint during her KidsTek class. “It’s a little bit trickier to find and navigate,” Courtney said. “I was surprised she grasped that skill since it’s a multistep process. For an elementary school student to retain that, I was pretty impressed.”

To teach PowerPoint skills, KidsTek Instructors like to get creative in order to maintain student attention and interest. This spring at Fulton Elementary School, Courtney introduced a PowerPoint project by having the students create a slide show describing what they did over spring break. By adding in specific requirements like using a minimum of four slides, uploading photos to each slide and including transitions, Courtney was able to sneak in key skills while also learning more about her students.

“Camiya started the session with some difficulties focusing, but she has greatly improved the second half of the session,” Courtney said. “Camiya has shown a great enthusiasm and stuff just started clicking for her.”

The KidsTek team always enjoys seeing our students learn and use new technology skills in our program, but that feeling is amplified when hearing how students use that knowledge to teach others. Stories like Camiya’s show that KidsTek is not just teaching skills, but supporting tech literacy and teamwork, affecting all aspects of our students’ education.

← May 2018 – Maria Jose Lopez
KidsTek Staff Engage with the Community →