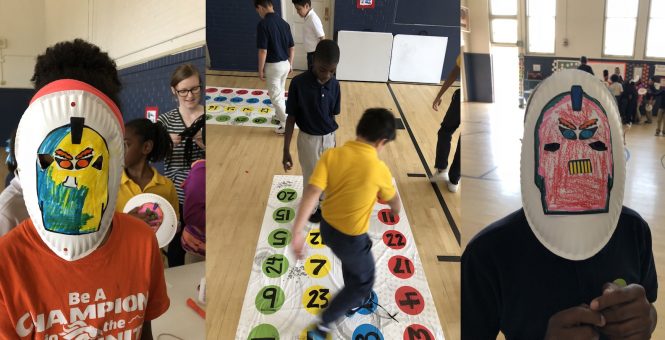 KidsTek Staff Engage with the Community

KidsTek was invited to attend a STEM Fair at Whittier K-8 School in Denver last week. This event was an opportunity to introduce different ideas and careers to students that were geared toward critical thinking, science, and technology.

Casey McCoy-Simmons, KidsTek Program Specialist, attended the event along with Program Director, Andrew Bissland. There were two gyms with different tables set up to house a variety of organizations to peak the students’ interest. In addition to KidsTek, the participating groups included staff from the medical field, the Butterfly Pavilion, and Denver Museum of Nature and Science.

At the KidsTek booth, there were two stations, to serve both younger and older students. For the K-2nd students, Casey and Andrew led kids in creating their own robot masks. The 3rd-8th grade students participated in a strategic teamwork activity. Using a Twister board with the dots randomly numbered, students in small groups were instructed to touch the numbers in order, as fast as they could. They had three tries in order to see if they could improve their times measured with a stopwatch by the KidsTek staff. Once the students achieved their times, KidsTek staff recorded their attempts in an Excel spreadsheet. This spreadsheet was then used to show students how to use basic functions in Excel, including averaging the times of their three attempts.

The fastest group of the day completed in 4.41 seconds. Casey McCoy-Simmons said that “This event was great because of the breadth of ages we were able to interact with, as well as having the school organizing the entire event so that each class could visit.”

KidsTek is always excited to engage the community through events like these in order to encourage interest in the STEM field!