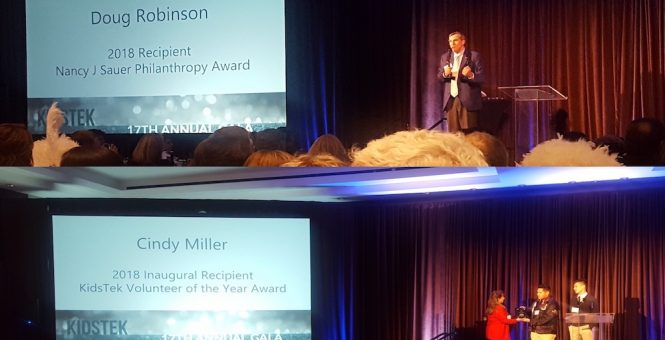 At KidsTek’s Annual Tech Leader’s Gala this year, two special awards were given out to honor and recognize the hard work of two phenomenal people. The first award was given to Doug Robinson, one of the original founders of KidsTek.  Doug received the 2018 Nancy J. Sauer Philanthropy Award due to his long service on KidsTek’s board of directors. He has been involved since KidsTek’s inception and has fostered KidsTek’s growth over the years. In the early years, Doug helped KidsTek grow, and found the right people to carry the torch after he stepped down from being the board chair.

Cindy Miller was the second award recipient of the evening. She was given the 2018 KidsTek Volunteer of the Year Award. Cindy earned the award for her many years of hard work and sincere dedication to the mission of KidsTek. Cindy became involved with KidsTek around 2004. Originally, she helped by donating and attending our annual fundraisers. Cindy wanted to become more involved, so she began volunteering and eventually initiated the KidsTek scholarship program. Inspired by a former board chair, the late Nancy Sauer, Cindy wanted to carry on her legacy and created a scholarship in Nancy’s name. KidsTek now awards the Nancy J. Sauer Scholarship to a deserving high school senior every spring.

Both award recipients say that their favorite part about being involved with KidsTek is the time spent with the students. Doug mentioned that hearing stories from the students “Lights him up,” and similarly, Cindy said, “It inspires me- I only wish we could do more.”