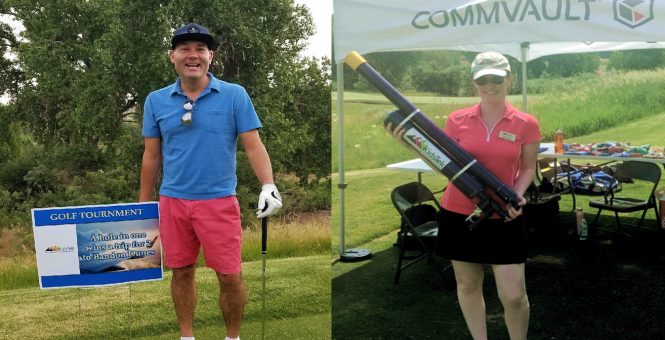 KidsTek returned to the Highlands Ranch Golf Club on June 14th to host the 17th Annual KidsTek Charity Golf Classic. Players had fun while giving to a good cause at creative giving stations including “The Vegas Hole,” “The Cannon Hole” and the “Pro Long Drive Hole.” One exciting event of the day was when one of KidsTek’s Board Members, Trent Martinet, a partner at Davis, Graham & Stubbs, scored a hole-in-one!

When golfers wrapped up the tourney play mid-day, they enjoyed a KidsTek luncheon and awards presentation.

The main event at lunch was the presentation of KidsTek‘s Nancy J. Sauer Memorial Scholarship to the two deserving students chosen this year. Jackie Montero, North High School graduate, was awarded $2,000 for her tuition to Metro State University of Denver. Even though she was not able to attend the luncheon, audio was played of her thanking those attending for their generosity.  Stephanie Mendez, graduate from Florence Crittenton High, was our main scholarship winner, receiving $5,000 that she will use to study computer programming. Cindy Miller, friend of the late Nancy Sauer and Chair of the KidsTek Scholarship Committee said, “Pay attention to this woman, because you will all want to hire her in just a few years!”

After the scholarships were presented, the lunch continued with a fundraising auction, which was led by longtime friend of KidsTek, Steve Foster, CEO and Founder of Connect13. KidsTek supporters were so generous raising over $12,000, and their auction contributions will certainly help KidsTek in our mission.

Also in attendance at the luncheon were Colorado State Senator Nancy Todd and her husband Terry, co-founders of Aurora Youth 4 Success, a teen summer career exploration camp, where KidsTek has been proudly been active for the past ten years.

We’re proud of our many tournament sponsors this year:

And the many other contributing sponsors who helped make this event possible.

KidsTek thanks all those who participated in the tournament and donated money to help continue to make KidsTek a success in schools throughout the Denver Metro Area. See you on the course again next year!