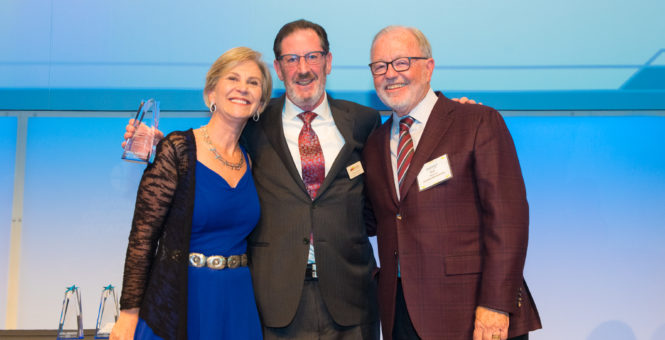 Richard Liner has worn nearly every hat at KidsTek. Nearly 20 years ago, Rich was one of the original co-founders of the organization. He served as a board member for many years and in recent years, has held the role of Executive Director, as well as KidsTek’s Board Chair.

Rich began his career as a computer scientist and eventually founded Liner Group, a tech staffing company. He was also a founding member of the Colorado Technology Association. This month, the CTA awarded Rich their “Bob Newman Lifetime Achievement Award” at their annual APEX Awards.

The APEX Awards took place this year at the Infinity Park Event Center. Awards for the night included: “CEO of the Year,” “Company of the Year,” “Advocate of the Year,” “Youth Tech Leader of the Year” and many more. Not only did the event honor many hardworking technology leaders in Colorado, there was also wonderful food and networking. It became clear during the evening that the technology community in Colorado has grown exponentially over the last couple of decades.

One of Rich’s proudest achievements was helping start KidsTek. He has found a lot of gratification in working with a non-profit. His remarks, upon accepting the award at APEX, included imploring the audience members to help others, in some way, every day.