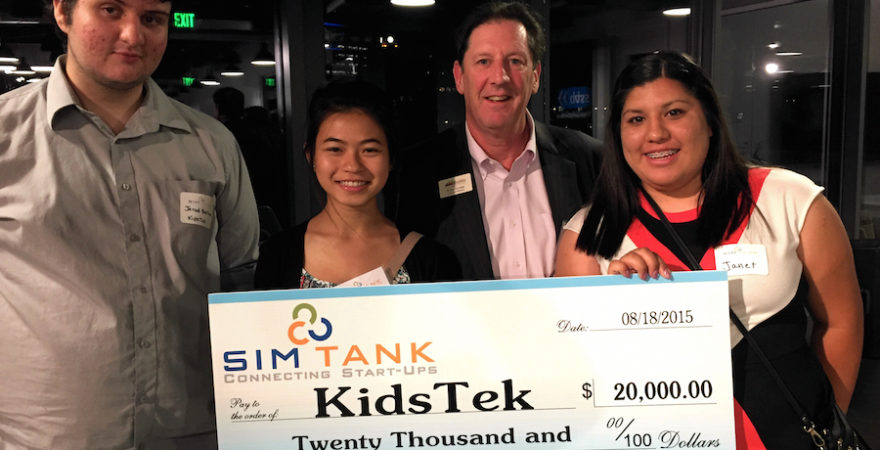 KidsTek Alums Swim with the Sharks!

Sometimes, it a good thing to swim with the sharks.  This was the case at last night’s 3rd annual SIM Tank event, attended by members of Denver’s business and tech community, as well as KidsTek staff and student alums.  The Colorado chapter of the Society for Information Management (SIM) hosted the event which is based on the popular TV series “Shark Tank.” Four Denver start-ups presented their pitches to investors in the style of the TV show.  After the competition portion of the evening, former KidsTek student Nin Aung presented her own pitch to the crowd.
Nin had previously attended a tech camp earlier in the summer hosted by Swiftpage, where she developed her business idea: a low-cost Uber-styled transportation service for university students.  Nin was very impressed by the passion of the pitches at the SIM Tank event, and their enthusiasm inspired her to explore more career options in the tech industry.  Nin is currently a college student and she was also joined last night by Jerod Burton and Janet Soto, two other KidsTek alums who have now started college.
KidsTek was the named charity of the evening’s event.  For the third year in a row, we were presented with $20,000 raised by SIM and the event attendees.  It’s inspiring to us to be so well-supported by the local tech sector; to help us in our mission to increase the digital literacy of students at Colorado’s highest-needs schools.
Categories: KidsTek News