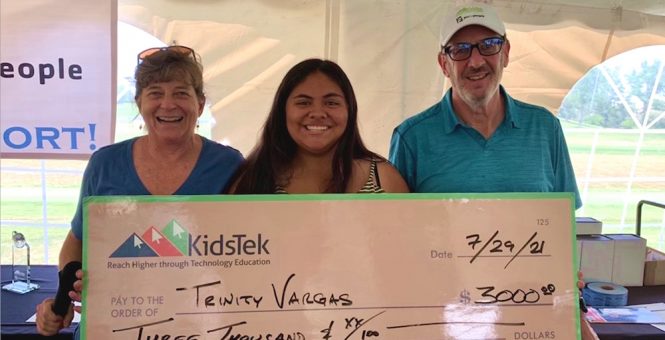 On July 29th, KidsTek held its 19th Annual Charity Golf Classic. 84 golfers came out to the University of Denver Golf Club in Highlands Ranch to enjoy golf, good food and drinks, networking, and the presentation of this year’s Nancy J. Sauer Scholarships! Golfers were also treated to entertainment from “The Hole Hecklers” as they made their way through the course, as well as special fundraising holes including the “Long Drive” and the “Golf Ball Cannon.”

After the golfers finished the tourney, a fabulous lunch from Hank’s Texas BBQ kicked off the awards celebration where Rich Liner, KidsTek’s former Executive Director, announced KidsTek’s merger with PCs For People. Cindy Miller, who volunteers to lead KidsTek’s scholarship committee, made the formal announcement of this year’s winners. Because of the overwhelming generosity from donors, the committee was able to award two scholarships this year. Trinity Vargas, from Denver’s North High School was awarded $3,000 and Isabella Dardano, also from North High, was awarded $2,000.

The day was made extra special by the attendance of a number of KidsTek alumni at the tournament luncheon. Four former students were able to come and share their KidsTek experiences with the attendees. Essence Benson, KidsTek’s first winner from when we launched our scholarship program eight years ago, was among the visitors that attended, and she is currently starting a new job in Aurora Public Schools!

This year’s tournament proved to be a success! KidsTek raised more than $50K and celebrated its merger with PCs for People with many of our supporters and friends. KidsTek would also like to give a special thanks to our tournament’s Gold Sponsor, CapTech. Because of our generous donors and company sponsors, KidsTek is able to continue our mission to prepare students for academic, career and personal success by increasing tech literacy at Colorado’s highest-needs K-12 schools.