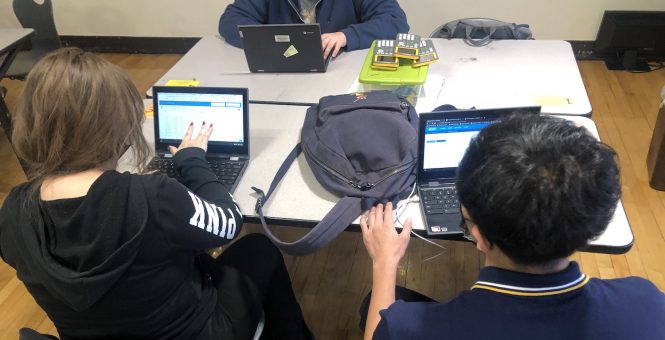 For many years, KidsTek taught our high school Business Computing classes using Microsoft Office applications.  Over the past couple of years, our host high schools in both Denver and Aurora switched to Google Apps as their primary office suite software.

Emily Tow, KidsTek Senior Instructor, worked to convert her curriculum to adapt to this change last summer. So far this year, students at Denver’s North High School have learned skills in Slides, Docs, Sheets and in basic Google Drive organization. This past week, North students wrapped up their work on Google Sheets. As a reward, during their last work day in the Sheets unit, students snacked on bananas, donuts and juice while listening to a “good vibes” Spotify playlist.

When asked why it was important for students to learn about the different Google Applications, Emily said, “What I love about teaching this Google Apps class is that not only are my students learning skills that will help them in their future careers, but also many of them are finding ways to use these skills to enhance their learning today. For example, one of my students was learning about polling in his civics class and had to conduct a poll and analyze the data, so I helped him use some logic formulas and make charts in Sheets. He told me later that it helped him understand the civics lesson better and also that his project was the best in his class.”

The class at North High will now be moving on to a new unit on Google Sites. Emily will kick this off with a project in which students will research a lesser-known figure in computer science, inspired by the movie Hidden Figures, and will make a website about that person.