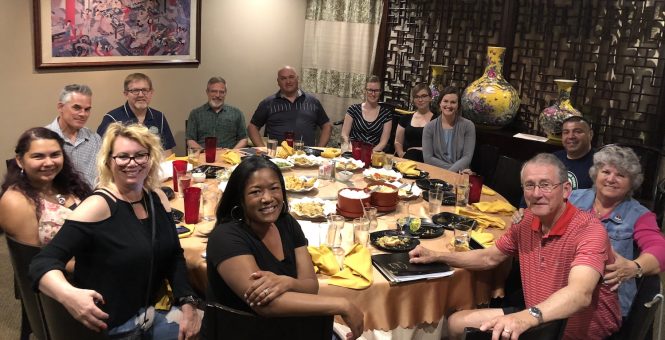 Aurora Youth 4 Success provides summer enrichment programs students entering 9th-12th grade who live in Aurora and/or attend Aurora or Cherry Creek Public Schools. Established in 2009, AY4S has since offered classes ranging from culinary arts and cosmetology to graphic design and automotive. KidsTek has been a part of this program since the beginning by offering an annual college and career exploration course on computers. In celebration of the 10th Annual Program, Casey McCoy-Simmons, KidsTek Program Specialist, sat down with co-founders, State Senator Nancy Todd and her husband Terry Todd, to get their take on the program’s past ten years.

Casey McCoy-Simmons: What spurred your initial idea to start a summer program for teens?

State Senator Nancy Todd: So I think initially, Terry, Peggy Rudden, and I got together and talked about a focus on trying to make sure we had something available for the kids in Aurora during the down month of July and that we wanted to look at kind of three different angles. One was regular attendance, so making a commitment to something. Another was to look at setting some personal goals and thirdly, career exploration. To widen their perspectives on what kinds of options were out there for them.

Casey: In what ways has the program grown or changed since its first year?

Nancy: I think it has really developed into where we are looking at wider choices. We are looking at an opportunity for more diverse speakers and classes. That there is a more organized front end in terms of making sure that it is not just falling on Terry and I. That we are developing other leaders and still maintaining high quality teachers. I think in terms of the diversity of kids has expanded and our goal is always to get students from all over both districts. Increasing our partnerships with other venues and different groups that have given kids the opportunity to learn about something they may never want to pursue, but to broaden their understanding. We’ve really continued our strong relationship with Operation HOPE for financial literacy. That still is a top priority. We still have a top priority and relationship with law enforcement, public service and fire. Despite the fire districts changing, we’re still holding on to that same importance not only of building a relationship, but also knowing and understanding what that pathway would look like.

Casey: What is the most surprising thing you have learned or experienced through the program over the past ten years?

Nancy: The most surprising thing? I think that people are willing to support programs for students. There is a strong sense of commitment for offering opportunities for students. It is a boat load of work. A lot of work. Terry does the majority of all of the work as I am in session and my goal is to continue to build contacts and relationships to bring them to the whole group, to become partners. The nice surprise is that the we have had high quality instructors that have stayed with the program for as long as they have and it has been a real benefit. The other really nice surprise has been how cooperative the host school districts are. They have been very supportive and really amazing partners.

Terry Todd: We actually had a meeting with people from both districts and we worked out a five year plan so we know what days we will be for the next five years and where there we will be — here at Overland or at Pickens [Technical College]. Our culmination will be [at Overland] each year. The district that hosts us will provide transportation for our field trips. We got all that worked out ahead of time, so that’s really kind of nice. We still have a few issues we have to deal with, but those are minor things.

Casey: Share a favorite memory from this year’s program.

Nancy: Well that fact that Carolyn [Childs] became the director is huge. We were thrilled because she’s a teacher and knows and understands who she is. I think both Terry and I celebrate that.

Terry: And that she can put up with me.

Nancy: Put up with Terry’s jokes! Favorite memory so far with kids, I think it’s watching kids rise to the expectations. Whether it is in listening to the speaker. Today the 3D Printing kids were really interesting to watch. They had [garbage] in the middle of the table and two or three of them kept pushing it off, pushing it off. Finally then one kid just walked over, picked it up and threw it away. It was like, that is called leadership. I commented on it, Terry commented on it. Then the other kid wanted to get in. Those are the kinds of things to observe; thoughtfulness from kids.

Terry: I think one of my favorite examples was two years ago, a mother came dragging her daughter in and said, “She doesn’t want to be here, but I want her to be here because I think it’d be good for her.” So I asked what class she was supposed to be in and the mother said Graphic Design. About that time Pete Cunis walked in and I go, “Here’s your instructor, why don’t you talk to him?” Well, Pete’s got a couple daughters about that age and so I pull him over and I say, “Go mom.” And she said, “Are you sure?” And I said, “If we need you, we’ll call you. She’ll be fine.” I talked to [the daughter] and said, “Just try it.” After class she came out with the biggest smile on her face and I say, “I guess that means you’re coming back tomorrow?” She said, “Yeah!” That just one day transformation as she thought, “This is something I can do and I like. Maybe I’d like to be here.” She came in everyday and did a  good job and had a smile on her face. Mom came back and said, “I don’t know how you did it.” And I said, “I didn’t do anything, she did it herself.”

Casey: What are some goals or aspirations you have for the future of AY4S?

Nancy: Obviously to continue growing and expanding programs, classes and speakers. Definitely next year we will add a Trio of Trades, which is really looking more at construction management. Looking at a health strand and what does that look like? Because I think that is definitely an area that is in dire straits and needed. I think part of what we’ve looked at is we have 127 kids this time. When we go pack to Pickens, they don’t have the large area for us to meet like this. We will have to shift that a little bit.

Casey: Do you have anything else to add?

Nancy: Terry and I are still very committed to organizing and making this program available. It’s a lot of work. Part of my struggle, personally, is because like last week, I had two days when I was on the transportation committee so I was gone. Not that I make it or break it whether I’m here or not, but I think that sometimes it’s helpful to try to share some of that but as long as I am still on the Senate …  I’m still committed in that respect as well.

Andrew Bissland, KidsTek Program Director, also shared: “We have been so honored to be a part of AY4S since the beginning of the program.  We have provided a number of different instructors and program offerings over the years, but year in and year out, we have been amazed at the quality of the overall program and how much the students get out of it.  Over the years, AY4S has developed into a true asset for the Aurora community.”