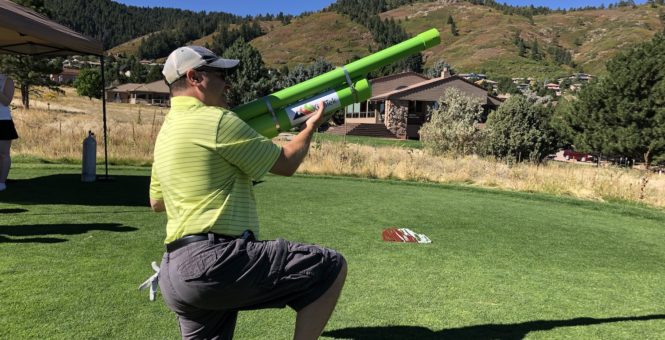 A beautiful September day was spent with Softchoice at Arrowhead Golf Course to raise money for KidsTek.

The KidsTek staff worked the “cannon hole” where golfers can donate to KidsTek for a chance to shoot our custom golf ball cannon. After adding about 130 psi, our cannon can shoot a golf ball about 375 yards down the fairway. Participants can choose how they would like to shoot the cannon. Most frequently, people choose to shoot the cannon “Rambo style.” But other options are “mortar style,” which involves resting the base of the cannon on the ground, or “sniper style,” which only a brave few attempt laying on the ground. Not only is this a fun way to raise money, but it also gives an opportunity for KidsTek staff to inform more people about the need for equity in technology access and tech education in the Denver metro area.

This is KidsTek’s fourth year working with Softchoice Cares (Softchoice’s employee-driven philanthropic program,) and this year’s Softchoice golf tournament raised a record $5,700 for KidsTek, which was matched by Softchoice Cares for a $11,400 donation. This generous gift covers the cost of a full semester of one of KidsTek’s high school programs, and brings the four year total of more than $40,000 raised by Softchoice! KidsTek is so grateful for generous organizations like Softchoice who are willing to work hard to raise money to support students at Colorado’s highest-needs schools.